If anybody follows this blog, I am going to be posting on Facebook from now on.

You can find the page here.

Be sure to like "Grog's Hiking Adventures" to add it to your news feed!

Went out this evening for an easy walk with Benny at the Hudson and Nancy Winn Preserve in the town of Knox. Parked at the old trailhead on Street Road. There were some new trails since the last time I visited. There is also a newer trailhead down the road - just past Maple Lane. We did a loop on various trails - yellow, blue, white, and green. Walked about 2.25 miles on a pleasant evening. Pictured is the newer white trail at the back of the preserve. It traverses a small escarpment with some views through the trees. 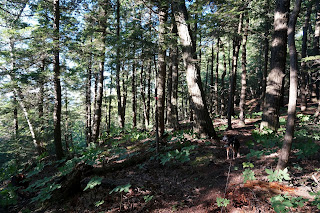 Did some more exploring in the southern Adirondacks today. Climbed Finch mountain in the Silver Lake Wilderness. Parked on West River road (outside of Wells, NY) just west of the bridge over Jimmy Creek. I put on my water shoes and crossed the West Branch of the Sacandaga. The water was low, so no problems with the crossing. Got to the other side, put on my hiking boots and headed up the steep hillside. It was a strenuous climb (900 feet in 1/2 mile as the crow flies), but the woods were very open and the footing good. After less than an hour, I reached the summit which had just a hint of a view. I headed west down to some ledges which had decent views looking westerly into the river valley. One of the trees had a metal box stuffed onto the top of it. Maybe that's a condo for the Finch? Anyway after a snack break, I headed back down to the river. I ended up about 1/4 mile west of my original crossing.

It was early, so I also did a short hike to Jimmy Creek falls. Didn't have to drive anywhere. Just crossed the road and followed creek upstream. I started along on the west side of the creek. After a few minutes, I crossed and picked up a path on the other side. I followed the path most of the way to the falls. I lost it at one point, but it was easy enough to just follow the creek. There were a couple guys at the falls hanging out and fishing. Not much water flowing, but still nice to see the waterfall. A nice summer day for some hiking. 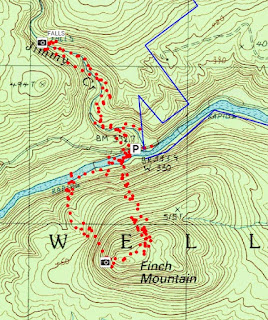 Went for a short walk this morning with Benny at the Holt Preserve (Copeland Hill). Parked at the lower trailhead. Climbed the yellow Ravine trail and then did a short loop using the green trail. About 1.5 miles distance.

In other news, Benny picked up a tick based infection (anaplasmosis). It was found on a routine blood test at the vet. He just has to take a course of antibiotics, but is otherwise fine. 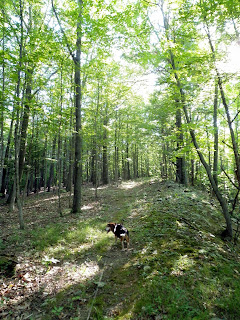 Went for a short walk this morning at Rensselaer Tech Park in North Greenbush with Benny. Did the yellow loop trail that is behind the WMHT building (local PBS TV station). Had a light rainstorm last night and there was murky water flowing down the creeks. About 1 mile round-trip.

Went for an easy hike this morning with Benny at Hannacroix Ravine Preserve in East Berne. Walked the orange loop trail - about 2.3 miles. Pictured is Benny on the "sandstone highway". 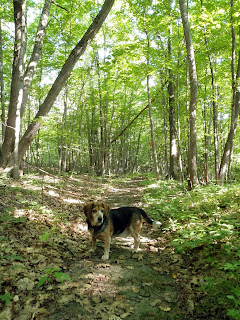 Did some exploring in the Southern Adirondacks today. Parked at a pull-off on Route 10 - just under a mile north of where it crosses the West Branch Sacandaga river. After some searching, I found the start of the unmarked foot path that leads to Chub Lake. There was a small campsite here. I continued on the path that goes around the east side of the lake and then heads north. Crossed two small creeks near a beaver meadow. The trail split and I followed the left branch that leads toward the lower cliffs on Sherman mountain (dubbed McMartin). Shortly after, I lost the path. The woods were open and I would have only continued on for another 1/4 mile anyway. So, I just started my bushwhack early up to Trout Lake mountain. It was easy going all the way to the summit. Dropped down west to the cliffs. The best viewpoint were from some ledges about 100 feet below and SW of the top. From there was a 180 degree view to the west. A nice spot to take a quick break before heading down. I wasn't able to find the path again until I reached the creek crossings. Even then, you don't see the path until you are practically on it. I backtracked to the split near Chub Lake mountain that leads to the cliffs on Chub Lake mountain (dubbed Lost T). I took the path to the top of the cliffs. There were some views to the NW above the trees. From there it was a short climb to the summit. Came back down and checked the cliffs from below. Then, I headed back to the car. 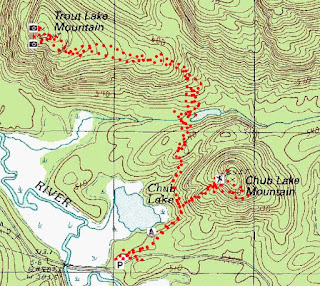 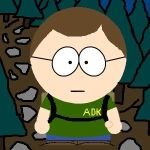